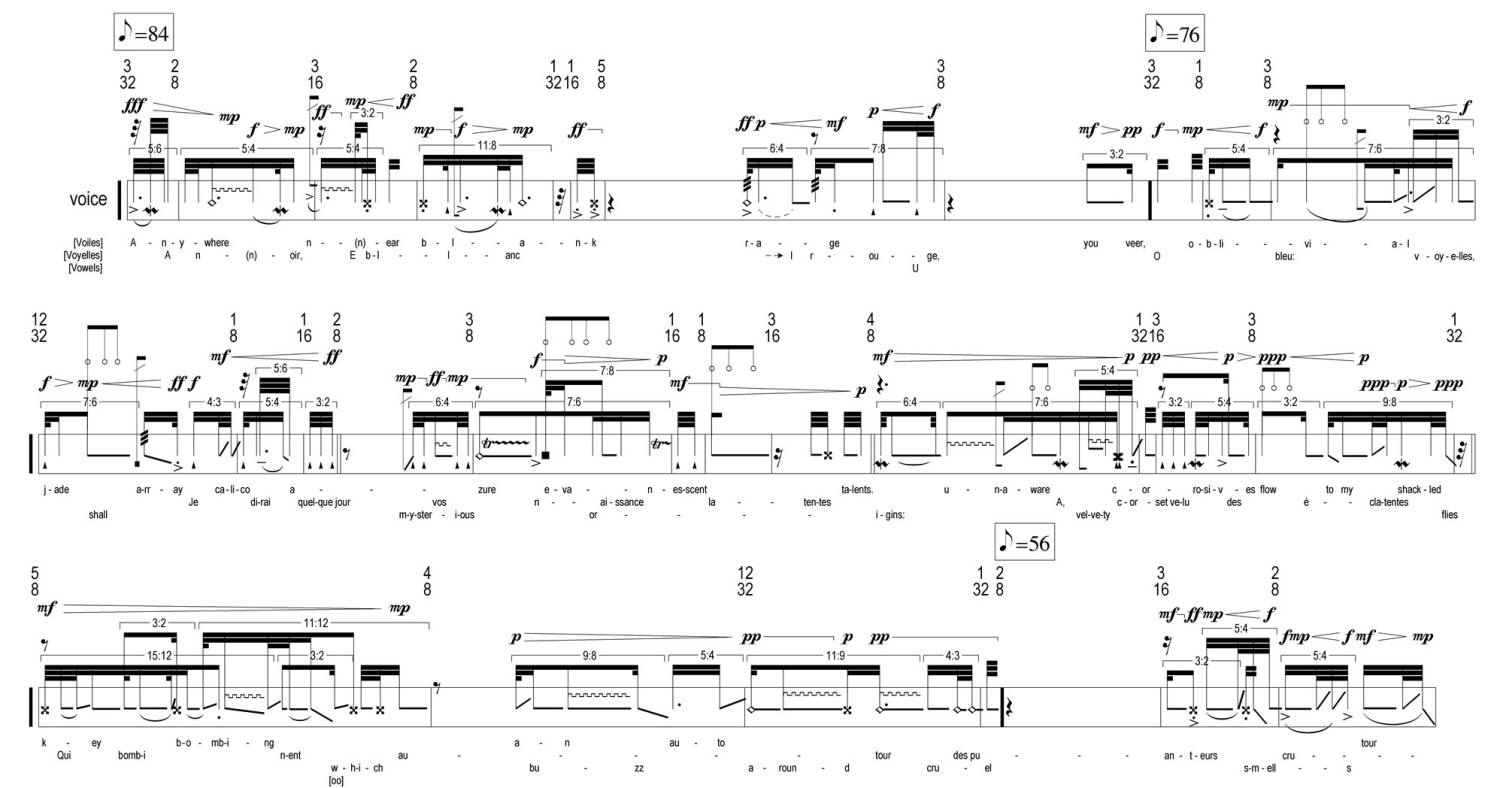 I, purples, spat blood, laugh of beautiful lips (2003-2006) is a piece that is fundamentally about the process of translation.  The work emerges from three texts:  Arthur Rimbaud’s Voyelles, a rich but also somewhat strange synesthetic and (vaguely) anthropomorphic exploration of the five written French vowels; Christian Bök’s Voile (a supplementary chapter from the astonishing book Eunoia, itself a univocal lipogram in which each of five chapters limits itself to a single vowel), a homophonic translation of the Rimbaud in which the sounds of the words, rather than their semantic meanings, are translated from French into English; and a quite bizarrely poor (and unattributed) English translation of the Rimbaud (Vowels) I happened to stumble across on the internet.

The piece directly confronts the notion of translation and all of the various ruptures and lacunae implicit in the process of transferring meaning between (and within) languages.  It is about fragmentation, about the decoupling of sound from meaning, about a linguistic “play” (with a fully intentional if reticent nod towards Derrida) moving between sound, meaning, syntax, and language through various fissures and explosions and leaps and obstacles.  The three texts run simultaneously throughout the work, and the cross-cutting between these linguistic strata sometimes probes meaning (jumping between languages through words with the same meaning/implication but clearly differing phonemic content), sometimes sound (through words with similar sonic content but different meaning (often quite humorously so)), and sometimes both (between French-English cognates).  Quite crucially, with the exception of one rather brief passage, all of this is done with an effort towards ensuring that the texts never devolve to the point of mere sound, mere phonemes – despite the extensive fragmentation (of words, of text, of meaning), their identity as words and as language remains more or less in tact.

In the end, the piece is about a foregrounding of the process of translation rather than the result of that process.  It addresses the way in which meaning and content are transferred and embedded and examines the phonetic aspect of that transference and embedding.  It explores the way in which we understand meaning and the ways in which meaning can be inferred even through the absence of stable, codified grammar, syntax, and even words.  The piece explores the instability of word boundaries, using common morphemes and phonemes to shift between languages and modes of syntax to undermine and destabilize the intricacies of linguistic codes.

Finally, it is worth noting the rather unconventional performance technique employed in the work.  The piece can be performed by a solo singer of any voice part.  The pitch material of the work is generated live, in real time – the singer matches the pitch (occasionally deviating from this pitch in a variety of ways) of a constant computer-generated glissando heard only by the performer.  The singer is able to enter their vocal range into the computer, and, using a constantly shifting pair of tessitura limits, the computer supplies the glissando, its pitches not only newly generated from performer to performer but also from performance to performance.  The score indicates all metrical, rhythmic, and textual data, as well as all information about articulation, dynamics, performance techniques, ornamentation, etc.  The only parameter not explicitly indicated in the score is pitch.  It is worth noting, as well, that the initial proportional rhythmic relationships were the result of direct transcriptions of my own readings of the three texts (though the resulting rhythms are distorted through various methods in their actual appearances in the work).

Sincere thanks are due to Brett Masteller, who constructed the Max/Msp patch and served as an invaluable technical assistant, and to Carl Rosman and Daryl Buckley, who made finishing the piece possible.  As he has kindly allowed me to pilfer multiple piece titles in addition to the text in this work, the piece is dedicated to Christian Bök with deepest respect, gratitude, bemusement, befuddlement, enthusiasm, and amazement.